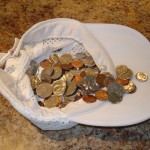 What do you do when a homeless person asks you for spare change? I used to pretend not to see and keep on walking. Too many to help them all.

And some were players, not really homeless at all.

Then I had an attitude adjustment.

My brother and I were walking down fashionable Boylston Street in Boston. Frank often says we’re “lightning rods for the lunatic fringe”.

We do seem to attract all kinds.

The sidewalk was thronged. A rumpled, ragged unfortunate headed our way. I knew he’d pick us out of the crowd.

The stranger drew closer. Frank stuck out his hand. “Hi! How’re you doing? My name’s Frank, what’s yours?”

I was stunned. So was the street person. He stepped back in surprise. A big smile lit up his face. He pumped Frank’s hand enthusiastically.

“M’name’s Mike!” he exclaimed proudly, totally delighted to be asked. He was about Frank’s age but looked much, much older. Worn down by cares and a life we can’t imagine.

They had an animated conversation about Boston and what we were doing in town. I watched in quiet amazement.

Finally, Frank said, “Well, it’s been great talking to ya, Mike, but we gotta get going.” He tried to press a couple dollar bills into his hand. Mike wouldn’t take them.

But Mike said, “No. You’ve given me something a lot better than that today. Thanks, Frank.”

Politely nodding to me, he shuffled off, still beaming.

I never felt prouder of my brother. Or more ashamed of myself.

Ever since, coins jangle in my pockets whenever I “go urban”. I always talk to panhandlers before giving anything.

I’ve heard some pretty incredible stories. Who knows if they’re true? That’s not the point.

In Toronto recently for a “girls’ getaway”, I became the lightning rod again. A scruffy-looking character picked me out of the crowd and begged some spare change.

Like Mike, he was stunned to be asked. We chatted. I offered a couple loonies. He refused them. Instead I got three heartfelt hugs.

My girlfriends watched warily, heads shaking in wonder, just like mine in Boston.

We’re all one step away from sudden disaster. What does it really cost us to show some compassion and treat a fellow human being with dignity? All I did was ask his name and listen to his story.

There are ten valuable lessons for business here. We need to:

Listen more, talk less
Be willing to serve
Identify problems, offer solutions
Watch out for scammers
Keep an open mind. And heart
Not judge appearances
Lead by example
Show genuine compassion
Be grateful for what we have
Give generously, whether of money, time or self
Make a difference, no matter how small

I know. I just gave you eleven. Because the twelfth is always to give more than people expect. 😉

Penny for your thoughts?
Any additions to the list?